In previous articles I describe Best and Worst Lower Body Strength Exercises for Athletes and Best and Worst Upper Body Strength Exercises for Athletes. To set the groundwork and to build on the exercises explained and described in those articles, it is crucial to develop functional core strength—to coordinate movement and transfer power between upper and lower body.

The Core consists of muscles in the trunk of the body that work together to support the spine and initiate power for everyday tasks as well as athletic moves. Of those muscles, the deep muscles of the abdominals and low back are most significant for maintaining strength and stability. A functionally strong core is key to improved athletic performance, injury prevention, and day-to-day living. 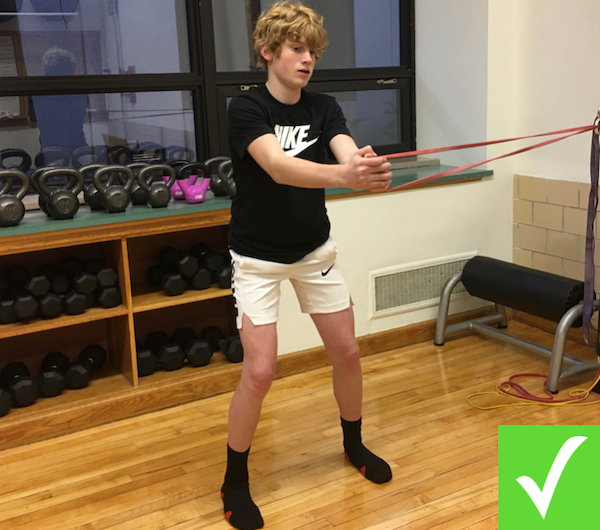 As more research has been conducted concerning the function of core muscles during sports, core training has evolved. Research and observations from experts confirm that the most important role of the core is to resist movement, not create it. When the core is able to stabilize the hips and spine during movement, athletes are better able to safely and efficiently transfer power between the lower and upper body for the actions of throwing, kicking, running, and jumping. As far back as the early 1990s, strength coaches began replacing old-school exercises like sit-ups and crunches—which flex the spine—with safer, more functional exercises like Planks and Bridges—which stabilize the spine. Today, sports performance coaches, physical therapists, and even most fitness instructors don’t recommend sit-ups or crunches (or any variation of the two).

Before pointing out the BEST core exercises, let’s look at the WORST exercises—and learn why those movements lack function and can contribute to injury. 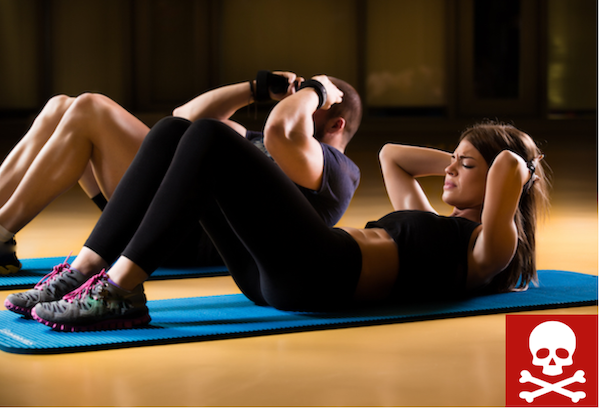 According to renowned researcher Dr. Stuart McGill—a professor of spine biomechanics at University of Waterloo, Ontario, Canada—a crunch or traditional sit-up generates at least 3,350 newtons (the equivalent of 753 pounds) of compressive force on the spine. While Sit-Ups are clearly the more dangerous of the two—by putting extreme stress on bones, ligaments, and tendons in the neck and back—crunches can be harmful too. The spine is not designed for repetitive flexion (bending forward). Bending the spine again and again can damage spinal disks over time and negatively impact posture. Dr. McGill says, “There are only so many bends in your spine until the discs eventually herniate.”

Sit-Ups and Crunches are not only harmful, particularly to the spine, they also lack function. Those two exercises fail to strengthen deep abdominals that build a strong, force-resisting core. For injury prevention as well as efficient movement during sports, the spine should remain stable—rather than flexed (rounded) as it is during Sit-Ups and Crunches. 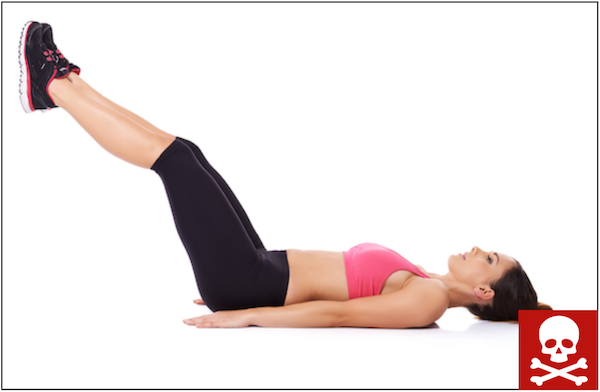 While Double-Straight-leg Lift can be risky—even for athletes with advanced levels of core strength—the exercise is extremely dangerous for those without the strength and ability to properly brace core muscles.  A prime mover in the bottom portion of a leg lift is the psoas (hip flexor) muscle, which attaches to the vertebra in the lumbar spine. When hip flexors contract during Double-Straight-Leg Lift, they can pull the spine into hyperextension, putting extreme pressure on spinal discs. From a functional standpoint, consider how abdominals and leg muscles work together in sports. An isometric contraction occurs in deep abdominals, while legs move independently of one another flexing and extending both hips and knees to produce force for actions like sprinting, kicking, and throwing.

Leg Throw-Down is similar to Double-Straight-Leg Lift, with the difference being that a partner stands behind the person doing the leg lift to “throw” his partner’s lifted legs toward the floor. This exercise is extremely dangerous. Like Double-Straight-Leg Lift, Leg Throw-Down contracts the psoas (hip flexor) muscle, pulling the spine into hyperextension and putting extreme pressure on spinal discs. The added resistance of forcefully throwing legs toward the floor dramatically increases pressure on discs. Even more dangerous is having legs thrown to the side. By adding a twist to an already vulnerable spine position, even the strongest of athletes are at risk for serious injury. 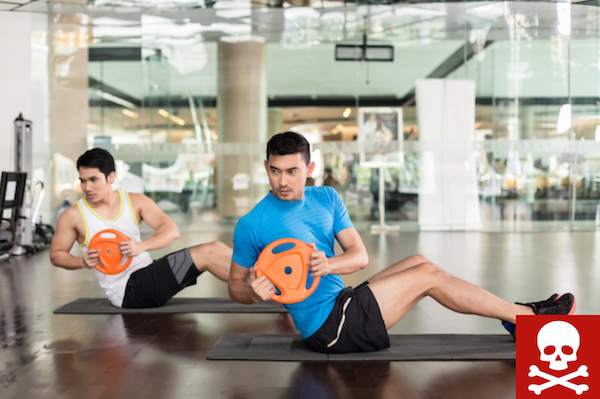 Because Seated Twist suppresses movement from the hips, the exercise is both nonfunctional and risky. Rotational movements of sports—hitting, throwing, kicking—all require hip rotation for power. Without hip rotation during rotational movement, the spine and back muscles bear more load and the back becomes vulnerable to injury. Before moving on to ANY rotation exercise (safe rotation exercises are Med Ball Lateral Throw and Band or Cable Rotation), athletes should first efficiently develop the core with ANTI-ROTATION exercises (read “BEST Core Exercises for Athletes” that follows) to learn how to stabilize hips and spine at end ranges of movement.

Back Hyperextensions (Instead DO Bridge, Half-Airplane, and Super Hero) 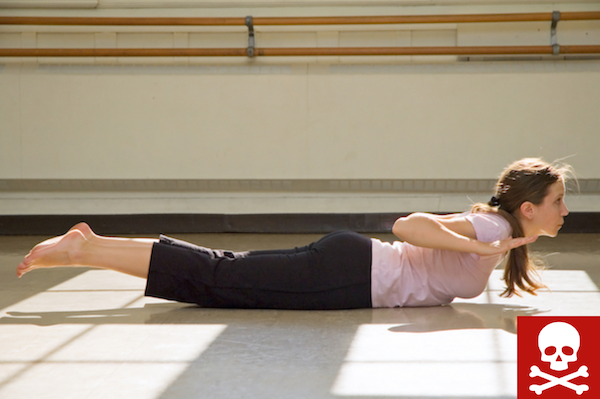 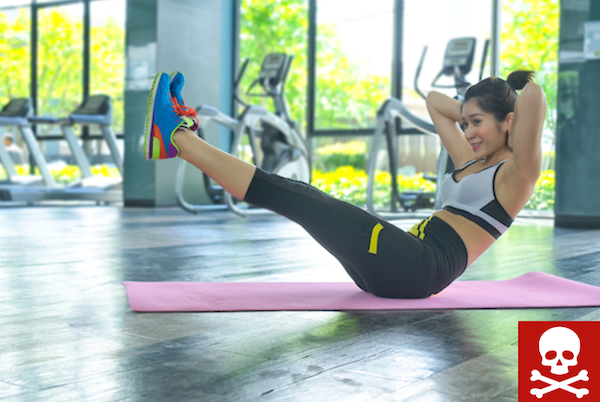 Suitcase Sit-Up combines the dangers of both standard Sit-Up (repetitive flexion of the spine causing stress on bones, ligaments, and tendons in neck and back) and Double-Straight-Leg Lift (contraction of hip flexor muscles in ways that pull the spine into hyperextension).

It is vital to emphasize the most significant role of the core: To resist dangerous and non-functional movement throughout the spine in order to safely transfer power from lower to upper body and to protect the back from injury. A well-trained core is the foundation for balance, strength, speed, agility, power, and almost every other athletic component in sports. When athletes consistently and properly perform the core exercises that follow, they can depend on strong, supportive trunks to transfer energy while decreasing the risks of low-back injuries and deceleration injuries to lower extremities (such as knee ACL injuries and meniscal tears).

Functional core exercises can be identified by the following categories:

Front Plank This well-known functional core exercise engages muscles that support the spine and hips as well as the scapula (shoulder blades). Athletes who perform Front Plank consistently and with precision, lower their risks for back and shoulder injuries while increasing power production and the ability to win battles involving contact with opposing players. 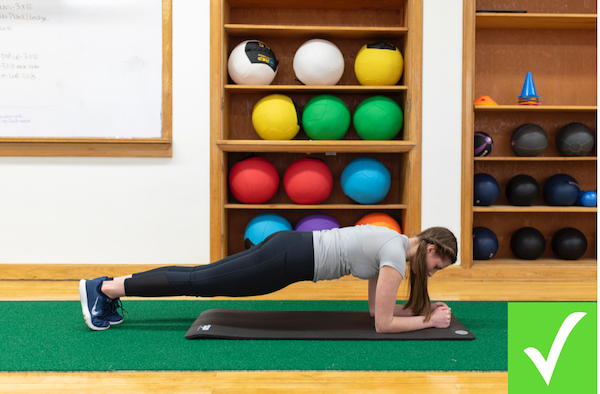 Note: I often see coaches, personal trainers, fitness instructors, and some strength coaches cue athletes to position hips and chest too low, which results in an overly extended spine and neglects muscles that support shoulder stabilization. Also, Front Plank is misused by requiring ridiculously long sets—upwards of 2 minutes or more. Inappropriate durations lack crossover to sports performance and can result in back pain and injury.

Notes and Cues for Front Plank: 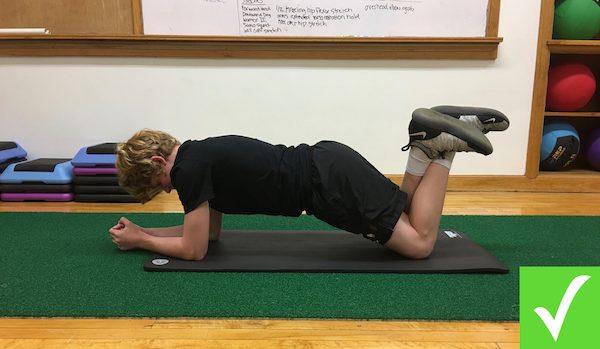 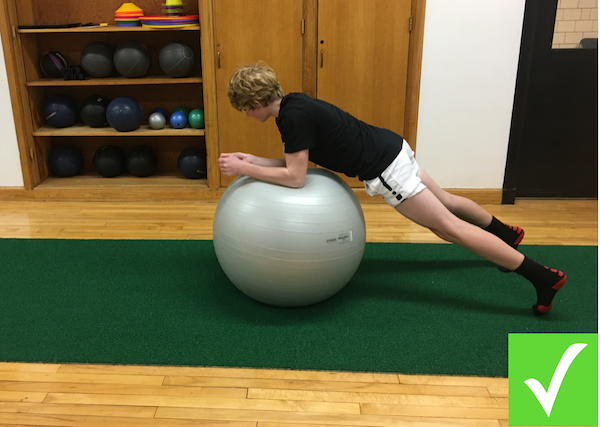 Notes and Cues for Stir the Pot:

SUPINE CORE BRACING   This is the practice of activating muscles surrounding the trunk in order to protect the spine, safely transfer power between upper and lower body, and stand ground against contact. 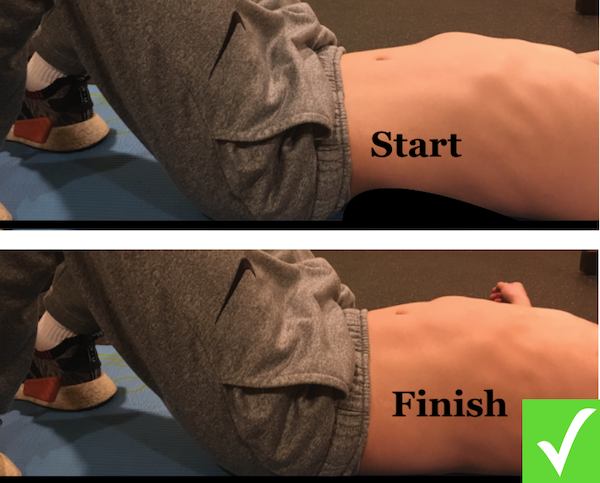 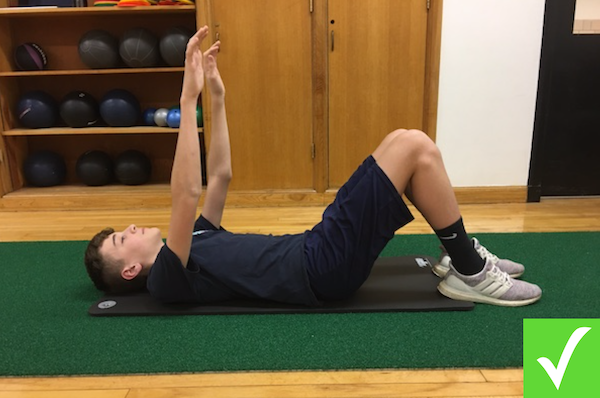 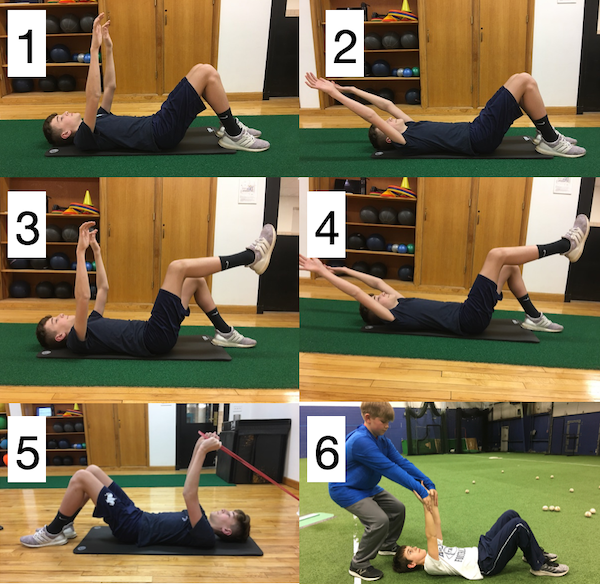 DEAD BUG   Once athletes understand how to brace their core from a supine position and have mastered Supine Core Bracing Variations (above), they are ready to move on to Dead Bug. 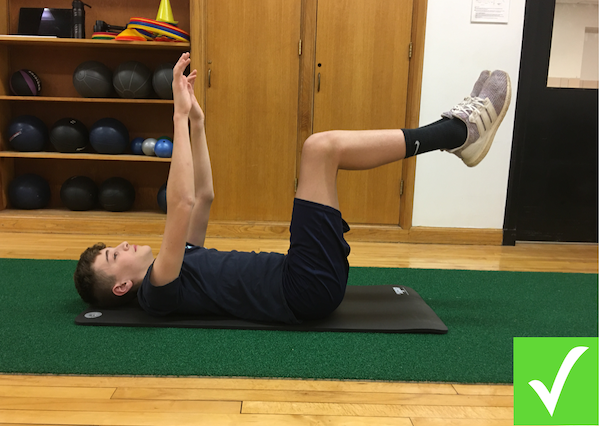 Notes and Cues for Dead Bug:

Dead Bug Variations – Follow the Notes and Cues for Dead Bug (above) while adding the variations (below).

Note: Variations 3-6 are advanced exercises requiring very strong abdominal muscles and proficiency in the practice of core bracing. When the core is not properly braced—resisting extension of the spine—the spine is pulled into hyperextension, putting extreme pressure on spinal discs. 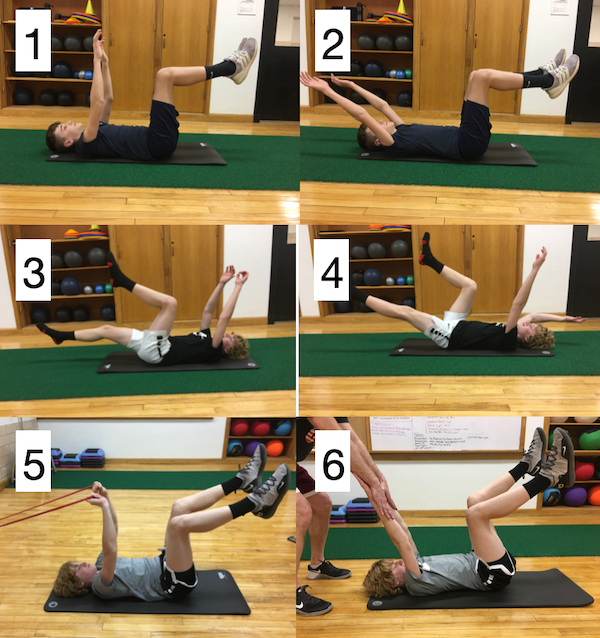 SIDE PLANK   This exercise engages muscles that aid in shoulder stability as well as hip, abdominal, and back muscles that support the spine. Because bodyweight is supported by one arm rather than two, Side Plank can be more demanding than Front Plank and requires precise form for both function and safety. 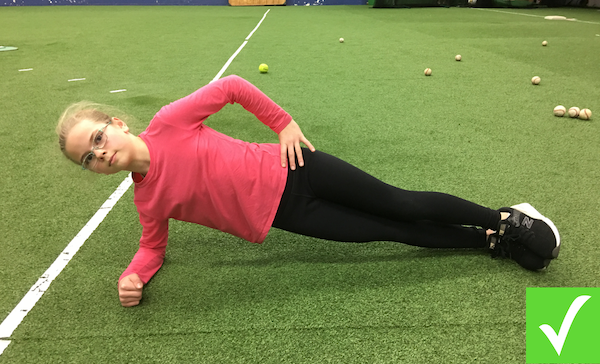 Note: Like Front Plank, Side Plank is often misused by allowing poor form and requiring sets that last too long.

Notes and Cues for Side Plank: 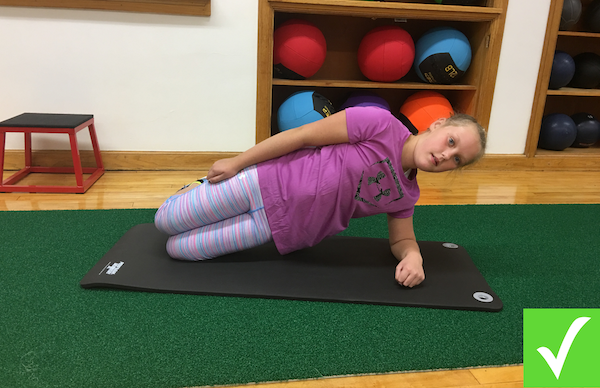 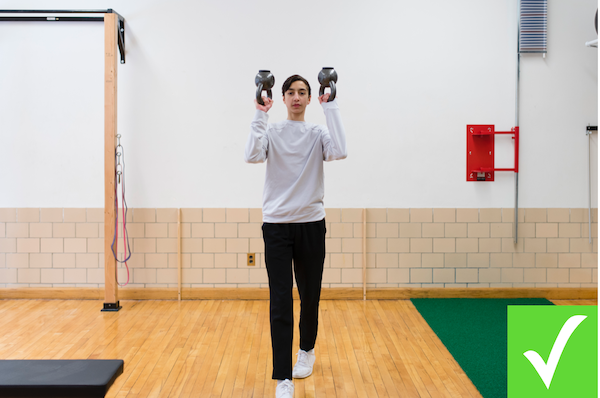 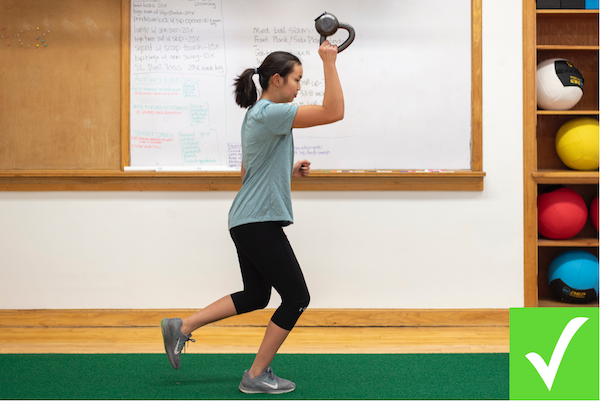 STANDING PARTNER CORE BRACING and BAND or CABLE CORE BRACING I advocate these exercises for improved rotational power as well as reducing risk for injury during rotational movements. The function of the core in rotational exercises is to initiate power and resist movement, and athletes need to be able to prevent rotation before they begin to produce it. Rotational exercises require a braced core, with most of the rotation taking place in the hips. The spine is not meant to twist deeply, a movement that can injure discs, muscles, and tendons in the back. Back problems occur when abdominal and back muscles cannot maintain control over the rotation between the pelvis and spine. (Watch for more about Rotational Exercises in my future article, “Best and Worst Power Exercises for Athletes”.) 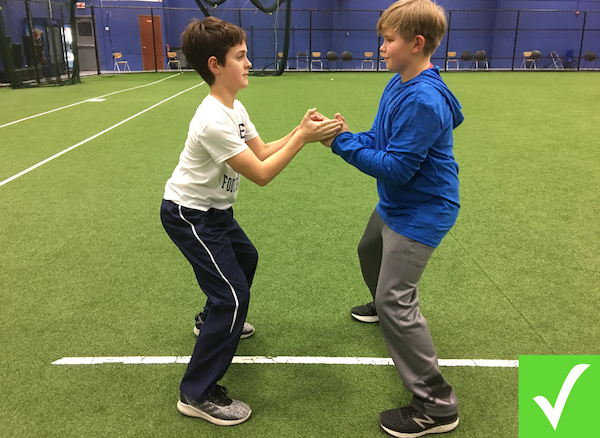 Notes and  Cues for Band or Cable Core Bracing:

STABILITY BALL WRESTLING   A variation of Partner Core Bracing, this exercise adds a reactive component to core stabilization. The ability to quickly and efficiently brace core muscles in response to outer stimuli is an important tool to improve balance, agility, and strength against opponents while protecting the spine, knees, and hips from injury. 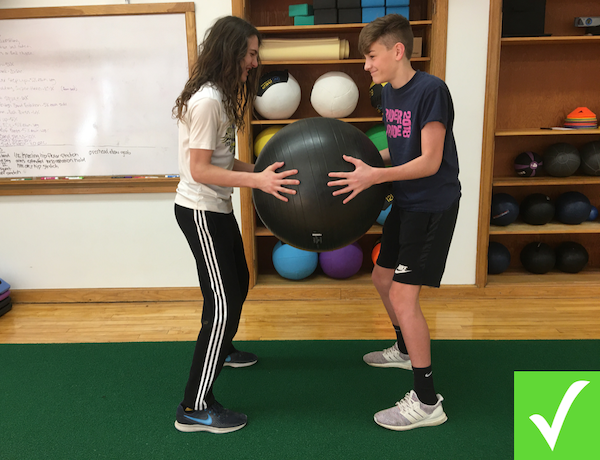 PALOF PRESS   This exercise is a variation of Band or Cable Core Bracing. Simply put, it is a Band Chest Press from Standing Core Bracing position. 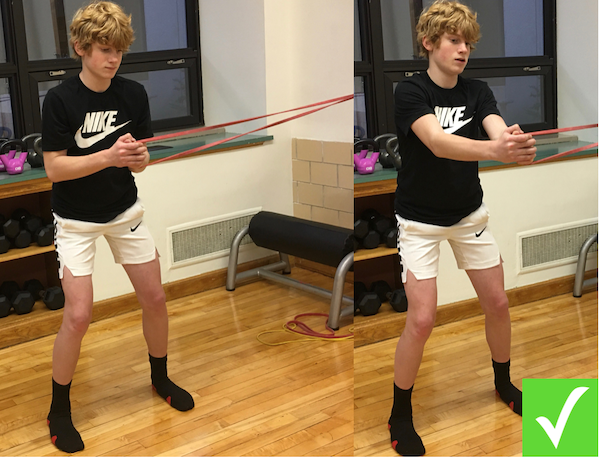 Notes and Cues for Palof Press:

BRIDGE   This versatile exercise targets stabilizing muscles in the posterior chain—back, glutes, and hamstrings. With proper cueing, Bridge can also be a core bracing exercise that targets all the muscles that wrap around the mid-section. 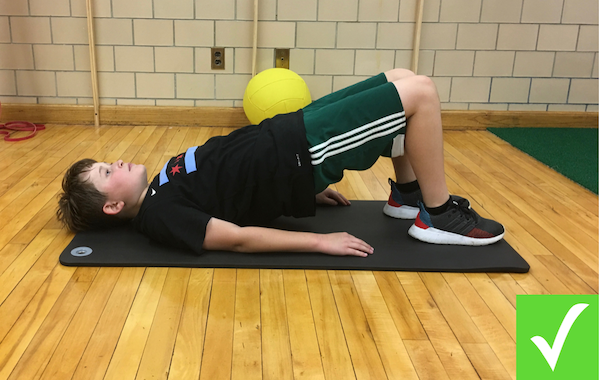 Notes and Cues for Bridge:

Bridge Variations – Keep in mind the notes and cues for Bridge (above) while adding the variations (below).

Note: Unilateral (single-leg) variations are advanced and should only be attempted after bilateral Bridge positions are mastered with good form. 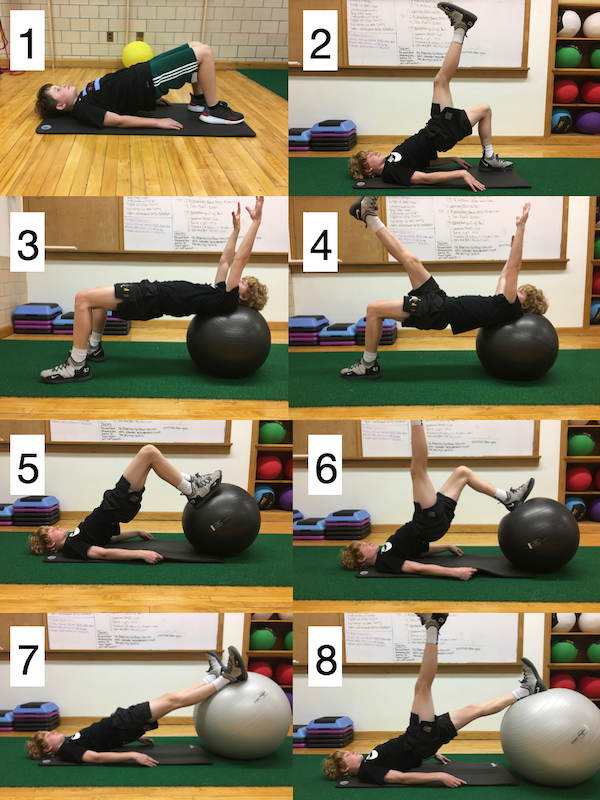 Note: Never do Super Hero or Half-Airplane from lying prone on your stomach, a position that forces the spine into hyperextension. 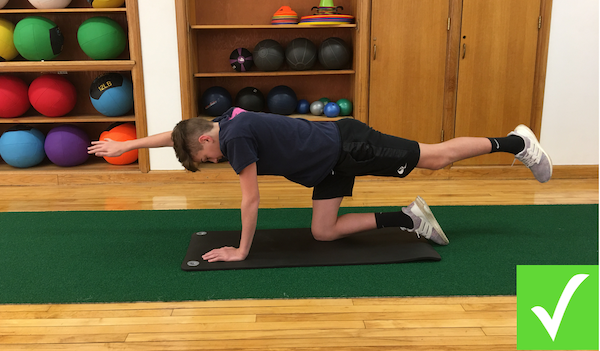 Notes and Cues for Super Hero: 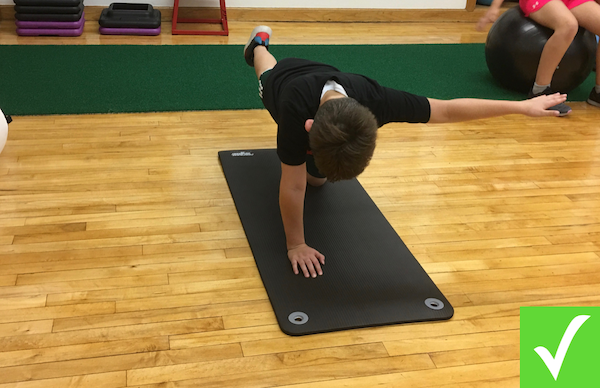 Notes and Cues for Half-Airplane:
Follow cues for Super Hero (above) except extend one arm out to the side (perpendicular to your body) rather than forward. 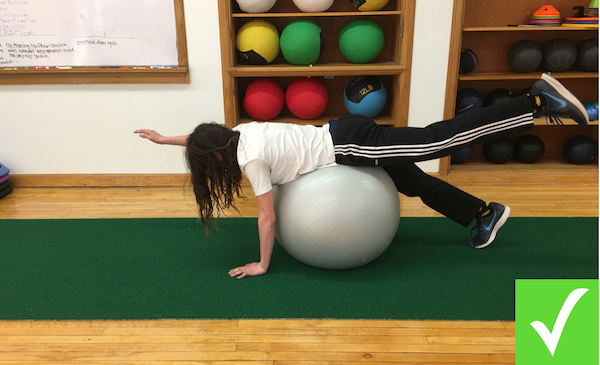 Note: To choose the correct size stability ball for this exercise, sit on the ball. Knees should bend at about 90 degrees while seated.

Notes and Cues for Super Hero from a Stability Ball: